In the summer of 2000 San Francisco lawyer and musician Cindy Ossias helped expose the illegal and corrupt activities of Chuck Quackenbush, the Commissioner of the California State Department of Insurance. Through this elected position, Quackenbush, a conservative Republican, was climbing the political ladder with sights on Governor or U.S. Senator. Because of Ossias' honesty and courage Quackenbush was forced "to resign in disgrace," and has moved to Hawaii.

Ossias was a senior member of the Dept. of Insurance which investigates and regulates the multi-billion dollar Insurance Industry to protect the public. After numerous fire and earthquake disasters in California the insurance companies delayed paying claims, misrepresented facts and the law, and engaged in other unfair settlement practices.

Ossias was appalled that her memos urging fines of over 100 million dollars were disregarded and ultimately shredded. Commissioner Quackenbush allowed the companies to pay paltry fines of a few million dollars to so-called non-profit foundations set-up by his political supporters.

Ossias, knowing what she planned to do could cause her to lose her job and open herself up to prosecution, blew the whistle on her boss, leaking confidential documents to the legislative consultant investigating the Commissioner's actions. As a result Quackenbush and his top men had to stop stonewalling and were exposed for their selfish disregard of the public and their protection of the Insurance Industry.

A short time ago, I was a private citizen in public service. Not many people outside the California Department of Insurance knew who I was of exactly what I did at the department. Now, anyone who has read a recent California newspaper may know me. I'm the Quackenbush whistleblower.
In deciding to become a whistleblower, I risked not only losing my job at the state, but also my license to practice law. Even though Acting Insurance commissioner Clark Kelso has called off the investigation into the department leaks, the possible consequences of what I did remain a constant low-grade worry. Will I be able to keep my job? Will I be disbarred?
I've been on paid administrative leave since June 22. That was the day I returned to my office after disclosing to the California Highway Patrol that I had photocopied "confidential" department documents and supplied them to the Assembly Insurance committee. (For those who may not know, the CHP is the agency responsible for protecting state office buildings and safeguarding state property, including the documents I leaked.)
A few weeks into the Quackenbush hearings, the CHP faxed memos summoning me and two other department lawyers who worked on the Northridge earthquake team to an "interview/interrogation." Naturally unnerved by this development, the three of us decided to go to our union to obtain lawyers. (Unknown to the others, I already had a lawyer because I knew what they didn't-that I was the leaker.)
My appointment was set for June 21, at the Department of Insurance headquarters in Sacramento. I already knew I was going to tell the truth, but I was nervous and scared and knew I couldn't just blurt out a confession and get it over with. It made more sense to follow the CHP's procedures and answer questions.
In a conference room on the 17th floor of the department's headquarters, a few doors from Commissioner Chuck Quackenbush's office, I met with two officials from CHP's Internal Affairs unit, one a captain who observed and a second man who asked questions. For the first 20 minutes of so, I answered a series of mundane inquiries, "How long have you worked for the department?" "Where is your office located?" "Where were the documents in question stored?"
Finally, the key questions came. "When was the last time you saw the documents in question?"
"In January or February of this year," I told them.
"What was the purpose of your looking at them?"
"I wanted to photocopy them." There was a short pause.
"Why did you want to photocopy them?"
"I wanted to give them to the Legislature, "I answered.
Their jaws dropped.
The captain, who until this point had not asked many questions, inquired, "Did you give them to the Legislature?"
And I said, "Yes."
They looked at each other, looked back at me, and one said, "We'd like to take a break now."

When we came back, I was read my Miranda rights. After my lawyer made it clear that I would not answer questions pursuant to any criminal interrogation, the CHP officers continued the "administrative interview," as they called it. Mostly they asked for details about how I'd transferred the documents and to whom I'd given them. It was clear to me, though, that what they really wanted to know was why I did it. It's a question I've thought about a lot lately, and I told them pretty much what I'll repeat here.
Along with examiners and other lawyers from the Department of Insurance, I reviewed the insurance companies' claim files-files that reflected the insurers' claims handling practices following the Northridge earthquake. We had seen firsthand the effects of the companies' mistreatment of policyholders: inadequate and even cursory inspection of homes for damage; ridiculously low settlement offers insufficient to pay for needed repairs; unreasonable delays during which policyholders were forced to wrangle for benefits they were entitled to; long periods in which policyholders were out of their homes while repairs were being performed; delayed discovery of the full extent of damage; and unrepaired damage exacerbated by aftershocks, resulting in policyholders living in unsafe structures and their supplemental claims being denied because of a purported expired statute of limitations.
In over 10 years with the department, I'd worked almost exclusively to improve enforcement of fair insurance claims settlement practices. Under former Commissioner John Garamendi, I helped write regulations specifying and explaining the requirements of the California Insurance Code's Unfair Practices Act. I've helped amend the regulations twice since then.
I acted as project counsel for the department's efforts in helping survivors of the 1991 Oakland-Berkeley firestorm, the 1993 Los Angeles area fires and the 1994 Northridge earthquake. 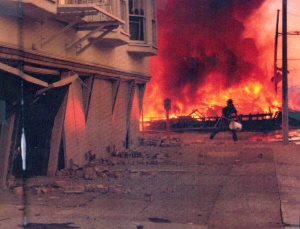 I attended policyholder meetings, helped write the department's claims guide for residential property loses and participated in claim workshops for fire and earthquake survivors in Southern California. In 1992, I brought a disciplinary action on behalf of the department against Allstate and one of its agents for unfair settlement practices with firestorm claims and misrepresentations made during sales of homeowner policies, an action that garnered one of the highest fines the department had levied against an insurer up to that time.
A few years ago, a consumer advocate named John Metz persuaded then-Chief Counsel Bill Palmer to a broader view of the time-limitation period for submitting an earthquake insurance claim than the strict one-year view espoused by most insurance companies. I was assigned to work with Metz in drafting a document applying case law to support the longer period. That document was disseminated by Quackenbush at a Los Angeles press conference in 1998, held at an earthquake victim's home. The arguments and case authority contained in that document have found their way to the California Supreme Court, which is currently considering the issue in an earthquake case entitled Peter Vu vs. Prudential Property and Casualty company. I tell all this not to impress people with my experience, but to illustrate that the commissioner's settlement scams-in which insurance companies escaped fines and restitution owed to thousands of helpless earthquake victim policyholders in exchange for a few million dollars in "contributions" to phony foundations set up by Quackenbush's political supporters-hit me where I lived...
This may sound corny, but duty and conscience compelled me to act. I had spent virtually my entire career at the department of Insurance fighting for fair treatment for catastrophe victims. These men-Quackenbush and his executives and middle managers-had turned their backs on the victims, and in doing so they had turned my back and the back of every department employee on the victims, too. It's difficult to articulate outrage on paper. I felt that someone had to do something. By the time I'd finished my interview with the CHP officers that long-ago Wednesday, I was crying. (They looked like they were on the verge of tears, too.)
The next day, I went back to my office in San Francisco. Some of my colleagues took me to lunch. When we returned, my immediate supervisor was waiting for me, clearly unhappy with having to inform me of department chief counsel Brian Soublet's order to "vacate the premises immediately." Word spread quickly, and before I'd finished gathering up personal items, an entourage of my colleagues had formed to support me on the way to my car. It was an emotional few minutes. They hugged and kissed me. One friend told me I was her "hero." I lost it and broke down in tears. It was embarrassing.
I've been so moved by the outpouring of love and support from my co-workers at the department. It was as much for them as for the people of California that I'd leaked the reports that illustrated the commissioner's duplicity toward the public. During the five years after Chuck Quackenbush first took office and installed bill Palmer as his right hand, morale at the department steadily sank.
I work with dedicated public servants. There are lawyers, administrative law judges, investigators, examiners, analysts, support staff in every state agency who want to do the right thing for the citizens for whom they work. They are underappreciated: nonetheless, they show up for work every day to try to regulate industries that if not closely regulated, have enough money and power to make all out lives miserable on a daily basis. These state employees are not saints; they chose public service for different reasons personal to each of them. They do, however, invariably derive tremendous satisfaction when their work actually serves the public.

Cindy Ossias' colleagues welcomed her back to her job in September. She continues to work on behalf of the public.